Reason Stated:
This would affect the country’s unitary character

Ridiculous ... what a reason to hold on the power at Delhi so that every citizen in India has to travel all the way to Delhi for justice.This is similar to the situation when Chennai High Court bench was about to created in Madurai. Chennai based lawyers were crying foul , as they were afraid of losing their business.

I don't see a single reason for holding on Supreme court in Delhi alone.Psychologically Supreme court's Judges & Lawyers don't want to release the grip on the power they are holding now and so finding unreasonable reasons to apply break on this process.This is in-spite of Govt favoring the process.

High Court's judgment which has to be appealed, has to be taken all the way to Delhi. It simply causes huge case backlog at Supreme court .Moreover its causing huge monetary constraint on the applicants.Its a easy guess how much huge lawyer cost will be in Delhi and language is also problem for people from non Hindi speaking states.This position is skewed towards rich who are ready to spend any amount .How do you expect a common man to to take a case from Chennai or Trivandrum to Delhi. This situation is analogous to Indian politics during 60s & 70s when the central govt wanted to maintain full control over all the States and forced Hindi on all states led to the mass Dravidian uprising in the southern states and anti Hindi protests.This also seems as if Supreme court doesn't believe the current Judiciary system in all states.

So do anyone gain from this ?
Definitely the lawyers at Delhi and no one else .

PS: Expressing opinion against court's judgment or views will amount to Contempt of Court . But i dont care :)
Posted by Premkumar at 10:06 AM 1 comment:

ULIP - What not to do in Investments !!!

Jan-March is the season when heards of investment advisers try to attract your attentions with a bunch of brochures and promises , which will project you as corepathi in a decade or so.I guess these agents give more promises next only to our beloved Politicians and obviously both of them never keep their promise. We have no other option , in both cases ,but to select a few among them .

If you have notice sharply , until last year both mutual fund agents and insurance agents would have tried impress you . But this year its a sole market for insurance agents . So what happened in between ... Until last year there was a Entry load of 2 -2.25 % on all mutalfund investments .It means if you pay Rs10,000 towards mutual fund , Rs 225 will deducted and remaining Rs9775 goes to your units / actual investments . Mutual fund company paid this 225 as commission for the Agents through whom the business came .

SEBI made a ruling last year stating that this hard fixed commission or entry load should be remove and that commission should be based on negotiation between the agent and the customer . Will you ever pay a commission for the person just filling the form and handling it to fund office , when you can do the same yourself either personally or online ? . Unequivocal answer is "No" . Our mind set is that we wont pay a charge explicitly but wont mind if its taken indirectly . This proved to be a death blow to mutual fund agents . They no more get commissions and why the hell should they do a work which wont pay them .

This turned out to be blessing in disguise for insurance agents . Lets concentrate on only one of the product(ULIP) which they sell , actually missell to be precise. So whats a ULIP ..
ULIP Stands for Unit linked Insurance Plan .

Based on Benifit it can be defined as

Based on cost it can be defined as

similar to mutual funds , insurance companies too use this charges to pay commission for the agents who sell them . Now the worst part about ulip is the charges are very very high .
Lets take a example of a decent insurance company and see how ridiculous it is. I am consider profit plus insurance scheme from LIC. Following illustration is taken from LIC's official website

In the first year for Rs 15000 paid as premium Rs 3600 is deducted as premium allocation charges and 720 as policy administration charges . So they loot 4320 out of 15000 straight away , whooping 28.8% , from your investments . Most of this money is paid to the agents as commission. For the next 4 year they deduct 6% of your money as charges. Tragic isn't it ? (unless you are insurace agent ) .
Now you should have got the reason why those agents are crazily behind you to get your investments done.This illustration is from one of the most ethical company, owned none other that the Govt of India .So think of other private insurance companies . They sure loot for more .
I personally dealt with a case when one my friend was about to be cheated . It was Birla SunLife Insurance and they were promising a electric cooker for any investments made before Jan 31.
It was hard time explaining to her that "there is no free lunch" and its part of her money coming back to her as bait.

So what is the alternative ..
Never mix up insurance with investments .

For your investments with tax benefit go for ELSS (Equity linked savings scheme ) which are mutual funds with three year lock in .

What to do if you have already invested in ULIP ?
Sit back and relax ,some mistakes cant be reversed and advice your near and dear like i am doing now :)

PS:
I started a ulip 4 years back paying 5K per month . It was HDFC unit linked endowment plan .Charges were 24% for first two years .In this i lost almost 32K out of 1.2Lakh .
Posted by Premkumar at 12:31 AM 3 comments:

Email ThisBlogThis!Share to TwitterShare to FacebookShare to Pinterest
Labels: ULIP

I was shocked when i routinely checked by mutual fund investments this weekend. Now its worth 45 K . But wasnt it 52K on Jan 1 2010. I double checked and found it to be true .So loss of 7K which translates to 13.5% loss in a months period :( .

I felt very sad about , What is this GOD doing , he should have taken care of me and preserved my investments right ? .Added one entry in my "Todo" list
>> Todo #5 : Mail GOD , and ask HIM to bring back my profits.

I become curious to find out what did happen in this period and googled out .The news was shocking. its was PIGS have got into dept trap and no one is ready to lend more them ..

whattttttt? What that hell does't it have to do my investments ?
I have heard in some Indian PSU Banks any pigs can get loans provided you have necessary political contacts.Why dont they try out here . Btw why does pigs want loan in first hand ?

On reading more i found that ,
Portugal , Ireland , Greece & Spain , collectively called as PIGS ( which dog has has coined this term .. should be useless investment banker from US i guess ) has high depth compared to their GDP and their sovereign dept is losing value which in turn is affecting the Europe and threatening the entire world ( simlar to Lehman episode )
[Src :http://www.washingtonpost.com/wp-dyn/content/article/2010/02/05/AR2010020504411.html ]

If you are still not clear read this :
What happens if a person earns Rs100 and spends Rs115 monthly . Will anyone be ready to lend to him .No isnt it ? Even if they lend they will ask high interest as this is a risky business. Thats what exactly had happened with these countries .

Greece is leading this crisis , and seems to be in a brink of default .. What did i say Greece ..No one is ready to lend for a country which gave us one of the best civilization , Plato ,Aristotle, Olympics and what not.. Surely Alexander the Great would be very sad about this.He conquered the entire world and now no one in this world to give loan to his country.என்ன கொடுமை sir இது

My GOD ...
Then i realized GOD seems to have far greater issues to solve than my 7K loss ...
I decided to take care of my loss striked my Todo list entry #5 .
Posted by Premkumar at 6:57 AM 1 comment:

"To us all towns are one, all men our kin.
Life's good comes not from others' gift, nor ill
Man's pains and pains' relief are from within.
Death's no new thing; nor do our bosoms thrill
When Joyous life seems like a luscious draught.
When grieved, we patient suffer; for, we deem
This much - praised life of ours a fragile raft
Borne down the waters of some mountain stream
That o'er huge boulders roaring seeks the plain
Tho' storms with lightnings' flash from darken'd skies
Descend, the raft goes on as fates ordain.
Thus have we seen in visions of the wise ! -
We marvel not at greatness of the great;
Still less despise we men of low estate."

This was part of my tamil syllabus during my high school days which was supposed to be memorized . But then i didnt like spending much time in learning it ( its true for english poems too ). My view was that learning a language can be limited at a level at which we are fluent in speaking & writing and more indepth study doesnt add any value. Among all subjects i would least in Tamil & English . Any way i didnt forsake it completely, even though French was also a option which would be less time consuming due to very minimal syllabus .Now i feel that i should have studied language with more passion.
Posted by Premkumar at 10:24 AM 1 comment:

This is a very common forward mail which i have read several times .But this time i sense something more meaningful in it .Am sure that i havn't understood it fully :) 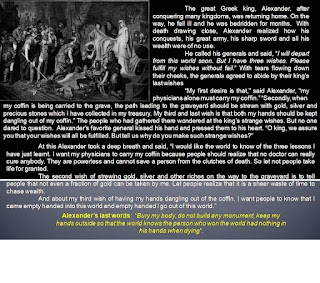