Preparations for this trip dates back to early April.Initially 8 people were also planning to join - Myself ,Angu,Mushi,Venkat ,GP ,Bharathi,Balu & Arul. We booked a 3 bedroom cottage in Fortune Retreat at outskirts of Ooty at the cost of Rs6000 per day for 2 days. Bharathi , Balu & Arul dropped out due to various reasons.So we kicked off the trip as a group of 5 people on 21 May.Onward journey was booked in KSRTC Volvo. Majestic bus stand seems to be consistantly chaotic during 6-11 PM. There are so much scarcity for space that the buses cant reach their platform and driver comes calling for passengers from the platform to the place where he has managed to park the bus.Though the bus was scheduled at 10:15, it started well after 11o'clock.We had good sleep in the bus that we didn't realize that we were traveling through a mountain path and reached ooty exactly at 6o clock in the morning.

We called up the cottage several times for pickup vehicle and after 1 hour we were mentioned that our checkin time is at 12 PM. Its only 7 in the morning and we had 5 more hours to kill. Its too early for ooty and there were very few passengers roaming in that tiny busstand. There were hardly any buses either.We noticed a local bus destined for gudalur and pykara falls/dam was on its route. Angu checked logistics with the conductor and we decided to travel to pykara .It was almost 30 mins journey and when we reached there road side eateries were getting ready for the day. We took bajjis & bread omlette as breakfast. It was here i switched on my camera and tried some snaps but to some reasons ( not known until now it) didn't work properly .Images were blurred / distorted. I tried changing settings and eventually tried all possible permutation and combination of settings after which it started to work. 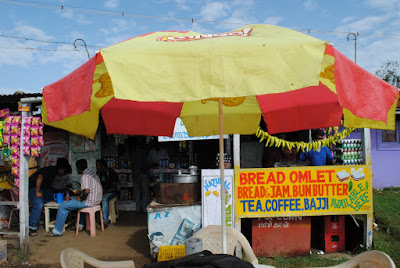 Still i am not sure if it was due to some settings or some hardware fault in this camera. After a prolooonged breakfast we decide wall down the path to pykara falls.It was some 2 km walk and on reaching the spot we were shocked to find a thin stream which falls down at a height of not more than 3-5 mts . Please don't call it falls hereafter.We cant even dip our legs there. 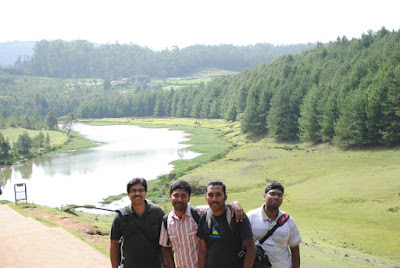 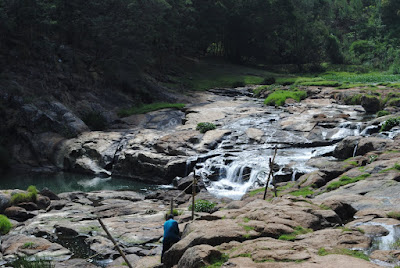 Until then we had one thing which we missed after that completely - Privacy . We whiled of some time there and then started walking toward the bus stand.By this time tourists have started trickling in and hereafter wherever we went it was too crowded as if a kumbamelah is scheduled in ooty. After a 30 mins travel by bus we reached ooty bus stand .It was 12 pm now. There was no pickup vehicle from the cottage and we hired a auto to reach the cottage.It was located in the outskirts towards coonoor road on a hilly terrain and we paid Rs200 for 5-6 km strech.
Location of the cottage was good with valley on one side.It had a hall and bedroom on ground floor and 2 more bed rooms underground. Balcony overlooking the valley was awesome.We were too tired by now and decided to take lunch and rest out that afternoon. This location is isolated from the main business district and there was complete privacy here. 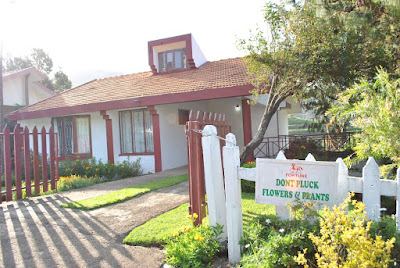 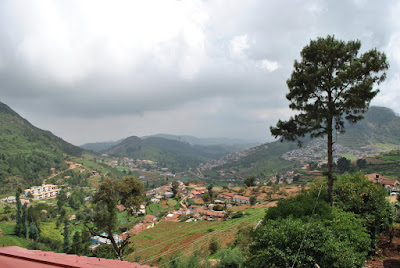 Restaurant attached to the resort was the only one reachable by walk and we were forced to eat here.We have to order in advance as very few people using it.But the quality of food was good and price was reasonable.That day we had a grand meal with chicken curry , fish fry. We choose the section of restaurent facing the valley where cool breeze blows even in 2 PM in the afternoon. 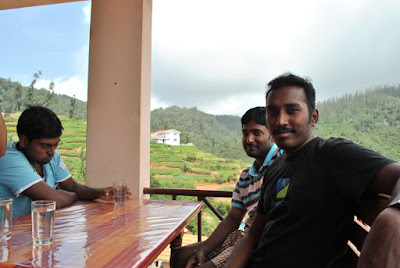 Then had a good sleep till 6 in the evening. Spent time in the night by watching TV & gossiping .Missed to take the playing cards :(.It was on this day the Indian Airlines flight crashed in mangalore and we were hooked to the news channels. Booked the cab for next day for Dodabetta & Mudumalai Santuary.

Next day had a yet another looong breakfast (idly ,dosas,puri,tea) and boarded the Cab. 5 people to be accommodated in a Tavera is quite spacious. First we reached Dodabetta - highest peak in south India.View is good from there. We skipped the telescope.Too much rush of vehicles.Last time when i visited here, i dont remember more than 4/5 vehicles ,but now it should be atleast 30-40 in all sizes. Leason learnt : Never visit a tourist spot in India in summers months however free you are. 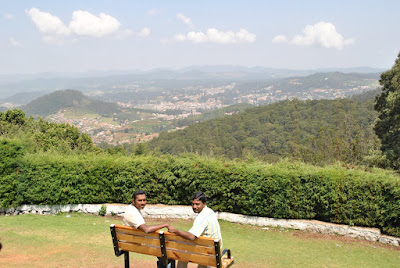 Next stop was Botanical Garden.Pretty much the same every time you visit here. Jam packed here too.Spent some time to take snaps. Flower show has ended recently (the previous week) and there were remains of the flowers kept for show. 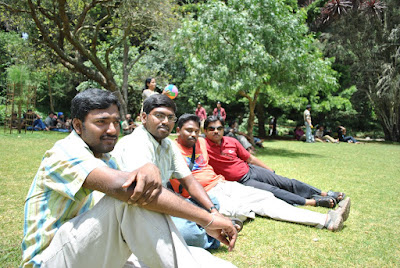 After roaming here for about an hour we left for Mudumalai .It as 1 hour journey with a 36 hairpin bend in the initial part of the track. Enroute we had lunch at a restaurant in the middle of the reserved forest area. There are lot of resorts deep inside the jungle on this road.Have to try it in future.
We reached Mudumalai at 3 PM and tokens were distributed for trip inside the forest area .Our number was 114 and current token no was around 50 and our expected start time was 5:15.So had to spend 2 hours.There was a small museum where we could spend 30 mins max if you read each and every line of the descriptions on the display.Our turn came exactly at 5:15 and we boarded the van and set off into the jungle.Path was bumpy.What else can we expect in a jungle when most of the city roads are inferior to that.We got seats at the last row of the van ,which magnified each bumps.This also made usage of camera extremely difficult.We were able to see few elephants , bizons , peacock and lot of deer. 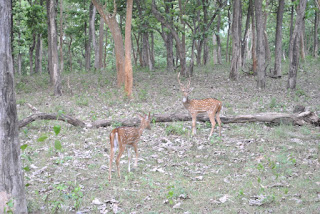 It got over around 6 and we started back to ooty and reached at 7 or so.Hire charges were Rs2000 for the cab. Driver was friendly and gave us the idea of going for a trek the next day.
Next day 4 of us (expect angu) started of for the trek.It was on the highway to coonoor. A walk of almost 3 kms on this road to a Hanuman temple and we need to climb up the hill from there. 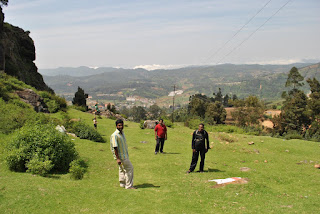 After trekking almost 2-3 km on the steep path we reached our destination , a bigger temple in between the caves. We had breakfast ( bread,jam,pickle) which we had carried with us. There was path to go up even higher but due to time constraints we returned. Checked out of the cottage at 12:30 and started towards ooty busstand.
We had 2 waiting listed tickets ( first class & ordinary ) in the monumental train to metupalayam but neither got confirmed. So we stood in the queue for unreserved tickets and that too was finished off before our turn. All that we could get is a first class ticket till conoor . Trip to ooty is not complete without this train trip and so we decided to take it. First Class compartment was lot better than when i traveled last time. 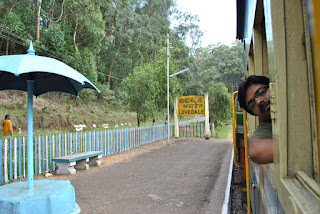 We reached coonoor around 4 PM and our initial plan was to continue the travel towards Coimbatore. A cab driver offered a trip of coonoor for Rs500. Since we had lot of time ( train was at 11 pm ) , we decided to take that trip. We saw tea gardens , sleeping lady view , dolphine nose , sims park and reached the bustand at around 6:15. 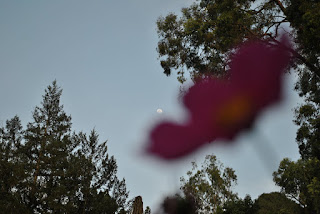 We got into a govt bus and stood all through the travel for 2 hours to Metupalayam. From there a bus ride to coimbatore (1 hour).Had dinner at Coimbatore and then took a bus/auto ride to pothanur. Train was atleast 45 mins late but reached bangalore on scheduled time on the next day.
Posted by Premkumar at 5:14 AM