Clean drinking water is distant dream for most of Indian households unless you are ready to spend huge sums on buying out water ( in cans ) in purified form or getting a purifier installed. The situation worsens when you are not sure of the quality of cans which we buy.We used to buy 20 lt cans some ISI company costing Rs 50 rupees .When you spend so much for water , last thing you will expect it to see a mosquito larva swimming vigorously as if practicing for next olympics. When i found myself in that situation , we instantly abandoned the idea of using water cans and started using boiled water.Also we started looking for water purifier to circumvent the long process of boiling the water ,cooling it and then using it. On examining large stores such as Croma ,the least expensive one was around Rs7000 , which also need to be fixed permanently ( which is difficult you in case you live in a rented premises). I remember seeing a press release from Tata Chemicals few months earlier about a low cost purifier named Swach which promises of good quality drinking water at affordable price. When i checked then with their retail outlet Croma, i was informed that it hasn't been released for consumers yet. So the process of boiling water using it continued for sometime .

Recently when i found Tata swach at display shop we bought it immediately . Retail price was mentioned as Rs 999 but we paid Rs 950 after slight negotiation. 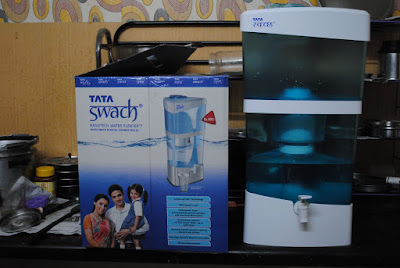 It has two containers interconnected by a modular tube which does the entire process of purification. It promises to purify around 3000 liters of water and then the purifying module should replaced at a cost of Rs 365 . It seems this amount of water can get reduced based on the quality of water used. So it takes a one time investment of Rs 634 and a running cost Rs 365 per 2000 Liters ( a conservative estimate) ie 18 paise per liter. Consider this with a water can which cost me 250 paise per liter earlier.The one time cost of 634 can be recouped after using for 275 liters .In time axis it takes around 2 months to recoup onetime expense ( considering 5 liters usage per day).
Not a bad investment right ?

Lets dwell more into design of this product.

Quality of purification:
I am not sure if the quality of purification is good as i am unaware of any scientific studies to validate their claim. No other choice but to bank on the promises of Tata Group which more ethical. There is a feature of Autolock due to which the purifying module stops water flowing water to lower modules when its effectiveness is done.

Material Used
This product is designed as a visually elegant model where entire product is made of see-through plastic ( might be to give the users that the quality of water is good). But it looks more fragile. I havn't done drop checks to verify it though :).Since this is targeted at the middle class and lower class families, care should have been taken to make it more rigid. Though replacing the plastic with stainless steel would have increased the cost of the product , they should have released one version in stainless steel albeit at a higher cost.Let the consumers choose what they want. Atleast the grade of plastic should be increased for sure ,else it will nightmare for frequent users (say house wives with naughty kids :) ) to handle it with care. 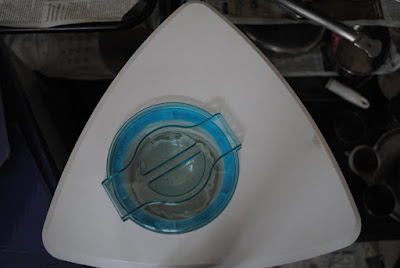 Shape of this product though stylish is little bit intriguing . Considering the Nano tag attached with this product , obviously the aim of the design team should have to give best productivity at least cost. Except the purifying module ,it has only 2 container each of which can holds 9 liters water. So design objective should have been to produce these containers as huge as possible at least possible price point ( with least plastic usage) .Since the shape is a hollow with a lid at top and bottom , design objective can be converted mathematically to design a 3D shape with maximum volume at a given outer surface area.This can more refined to find a 2D shape which has maximum area for a given perimeter ( as one axis , the height is mostly constant here).The cross section of this purifier is triangle. Is this a optimal shape ?
Lets take triangle and circle , of constant perimeter and find the area of each of them.

[ Save a interview question : why does a balloon blows up in a spherical shape ]

I can think of few reasons for them to choose the triangular design
But none of them give enough advantage to disqualify the cylindrical design .Companies of this stature should have done a lot of brainstorming before finalizing the design. Is this a flaw in design or am i missing something else there ?
Posted by Premkumar at 4:59 AM