Recently i was invited for the wedding reception of one of my college friend in chennai. I had to travel all the way from Bangalore for this single appointment. But was willing to attend it for the fact that i could meet many of my college friends. Also since the reception was held at one of the best halls in the city ( Mayor Ramanathan Chettiar Hall , RA puram ) near marina beach , i could probably spend some time in the beach too. Truly marina is one of the ever entertaining spots in chennai , irrespective of the fact it doesnt change much .

Everything went well .Reception met most my expectations .Wished the couples .Met many of my friends .Had a awesome dinner.Enjoyed breeze at the beach.But to top it all , a surprise awaited towards the end. Its a tradition in Tamil Nadu that family of bride & bride groom give a gift pack ( called as thamboolam : தாம்பூலம் ) for all visitors as a token of their thankfulness . This is given when the visitors are about the leave the venue .Traditionally it used to contain a coconut , betel leaves and supari. But nowadays these traditional gifts are overridden by more costlier gifts such stainless steel utensils, sweets etc depending on the economic capabilities of the families involved.

Surprise came in the form of the gift distributed .Couple of bags were given to each visitor. One of them as usual had a stainless steel plate and the other one had couple of saplings and a packet containing few seeds. People were interested in collecting the bag with saplings.Since this reception was flamboyant one , i guess there were atleast 1500 visitors . A conservative estimate that 50% of visitors collected this gift and 20% among them show interest in growing these saplings , it turns out to be 300 shrubs or trees (there were 2 saplings in each pack) . Pretty much nice isnt it. Government tries on its part to bring up awareness among people about the need for growing trees. Most of the ambitious plans of the government never comes out of the red tapes of bureaucracy and have never elicited expected responses from common man.I have strong reasons for saying so , as my father works for the horticulture department of TN govt . Have seen grandiose pamphlets from the govt but not much much have realised so far ( at least as far as i know ). But instead of govt , if our near and dear happens to give you a sapling there is certainly a higher probability that we will grow it up. Atleast we will try it.

I could hear ( actually overhear) few conversations that if such gifts were given in every marriage ceremonies , chennai will be green soon. Hope these aspirations become true soon .. 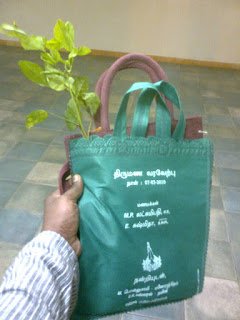 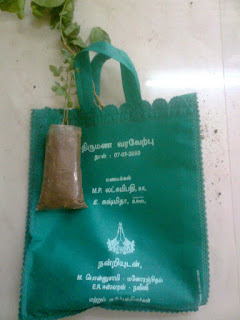 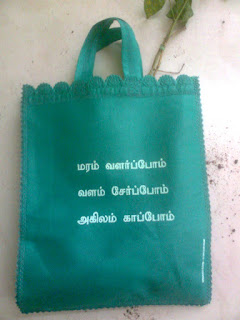 PS : I have brought those saplings given to me safely to Bangalore and have placed them in small plastic container . Join me in wishing them to grow well .