My Encounter with IPL

Last week my manager offered to take us to IPL match. Though i am not a vigilant follower of cricket & so far havn't watched a entire IPL match even in TV, i wanted to experience ground atmosphere. Match was scheduled to start at 8 PM and we started 5:45 PM from our office by walk and reached the stadium in 20 minutes to find already key locations in our gallery has been taken.Ground was almost 50% occupied 2 hours before the match started. 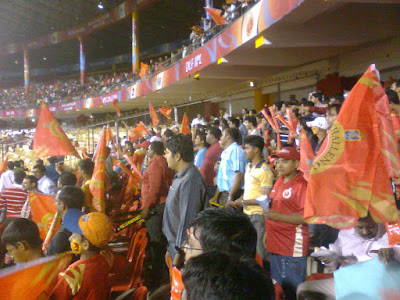 IPL clearly is no more a sport event & more of a entertainment melee. Adrenalin rush in the stadium is comparable to new year eve celebrations in Start Hotel or rock band performing in a college cultural festival.There were huge distractions for the players.Item songs were played even in 1 minute time gap for over change. A DJ was hired to cheer the players & crowd and he did his best to disturb everyone.Cheer leaders placed in strategic locations to cheer the already electrified crowd .As far as the match was concerned , tragically it turnout to be a low scoring game. 93 runs was the target set by Rajasthan Royals which was chased by Royal Challengers in 10 overs without any wicket loss. 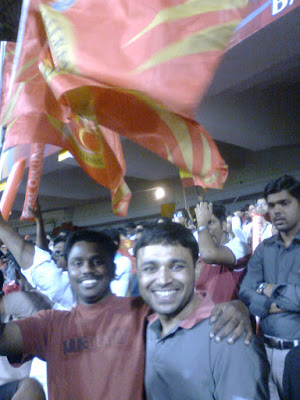 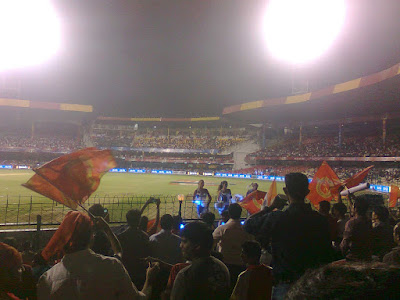 
What makes Cricket a money minting machine in India ?

Cricket is one of few items( infact very very few) where all Indians share same passion.Cricket is followed by people across all income groups , all ethnic groups , age groups and what not. Hence it makes the idle platform for advertising. Single ad with a cricket model can reach the entire country. No other medium can come closer to reach 1,150,000,000 people (1.15 billion .. yea its Indian population ).

I feel that Cricket is turning out be another impediment to Indian growth along with other Cs - Corruption ,Caste ism & Cinema.

Finance ministry is not a silent spectator .They have introduced clauses in recent budget to levy service tax on these events and on all associated promotions.[4][5].Service tax of 10% is not sufficient on such events.All we can hope is that Govt considers such events as unnecessary luxurious entertainment and tax them heavily on par with Cinema / Alcohol sales.
Posted by Premkumar at 6:09 AM